The Largest Eisa Festival in Okinawa 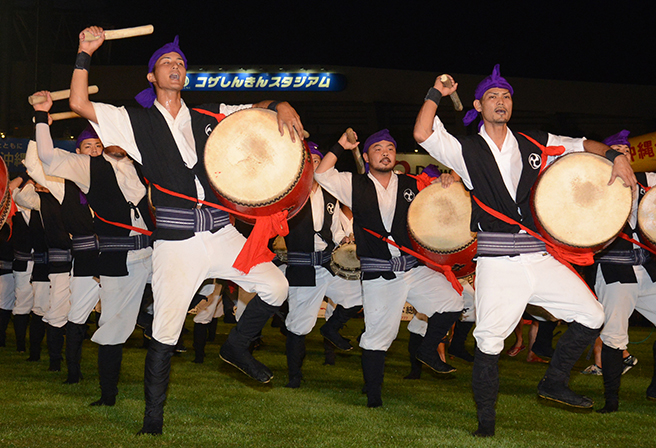 The Okinawa Zento (entire island) Eisa Festival is held every year on the first weekend at the beginning of Kyu Bon (Bon Festival of the lunar calendar). The festival got its start in 1956, using the formation of Koza city as a chance to have the Zento Eisa Competition. As an Okinawan summer event, it has become one of the festivals that represent Japan.

This festival will be a gathering of organizations such as seinenkai (youth groups) selected from every place in Okinawa and guests from sister cities throughout the country and supporting organizations.

The grounds will echo with sanshin (Okinawan instrument), songs, and the rhythm of taiko drums. An intense bachisabaki (the aesthetics of drumming) will move you. The festival is a great event where you can taste the flavor of genuine eisa to your heart’s content.

The festival is three-days long. The Michi-junee Parade (as a memorial service for ancestors) will be held on highway 330 Koza Gate Street on Friday. The Okinawa City Youth Group Convention will have their Okinawa City Youth Festival on Saturday. The youth groups gathered from the entire island will meet at Okinawa City Koza Sports Park as the main event on Sunday.

Also, the Beer Festival will simultaneously be held at the Sports Park Sub track & Softball Ground. The synergy will cause the bustle of the festival to continue in the vicinity of the grounds till late at night.