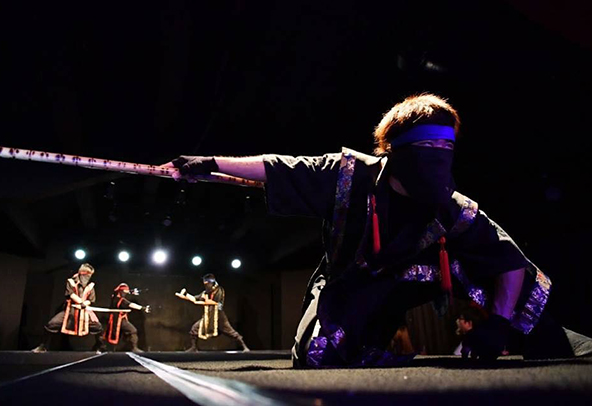 Perform 'Ninja' which is one of the representatives of COOL JAPAN, 'Karate' originating in Okinawa, and the story of Ryukyu Kingdom using high-speed action show.We perform the historical tale that Kyo-ahagon, founder of Karate, Red Ninja, and Blue Ninja had fought over Hoken(treasured sword) named 'Chiganemaru,' which has been handed down from 16th Century (the Ryukyu Kingdom era), using the method called 'non-verbal' which means 'without using words' so that not only Japanese but also foreigners can understand the story.
The show includes top-class high speed and overwhelming swordfighting with Karate, Nunchaku, Sai (an iron truncheon), Tonfa, and Sticks.
And the feature of our show is that the segment which performers let the audience to involve in the show by getting off the stage or inviting people from the audience to get on the stage.