Gusuku Sites and Related Properties of the Kingdom of Ryukyu

On November 30, 2000, UNESCO inscribed Gusuku sites and related properties of the kingdom of Ryukyu which consists of nine sites on the World Heritage. These sites symbolize the glory and history of Ryukyu kingdom specifically from the 14th to the 17th century. The Ryukyu kingdom flourished through trade with neighboring Asian contries and through these trading routes, brought back various influences in arts, religion, politics and academics.000年 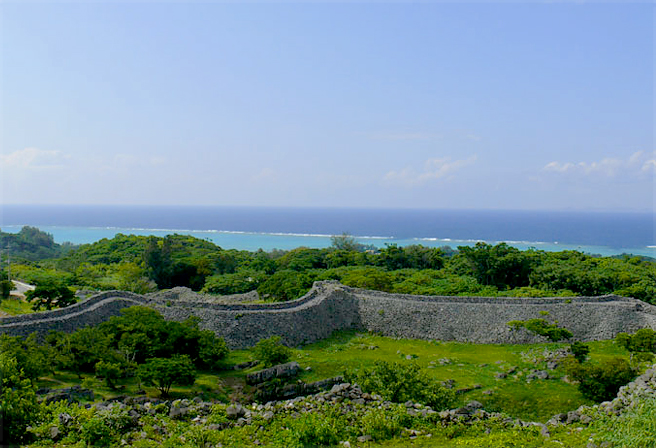 It was built in the late 13th century, and located on the Motobu peninsula at the height of 90 – 100 meters remaining roughly 1,500 meters of limestone castle wall. The castle saw three generations of rulers before it was attacked and destroyed by the armies of Chuzan from the central area in1416. Hokuzan governing in subordination to the royal capital at Shuri continued making their residence for several centuries afterwards. Wedding ceremony can be held here with an application in advance. 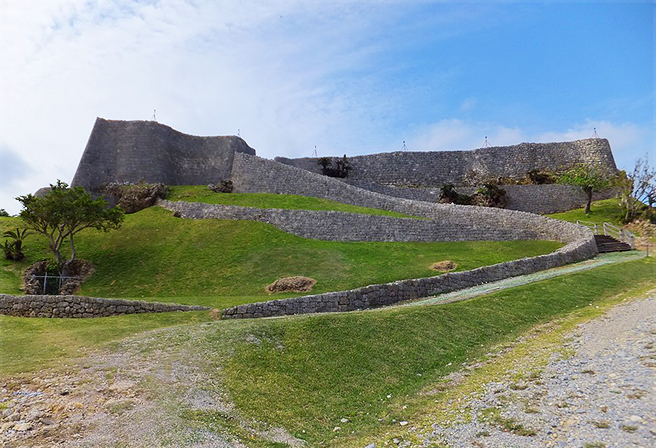 Katsuren castle was built during the 12th century on a large hill of Ryukyuan limestone overlooking the Pacific ocean on two sides. Katsuren castle had a lot of power within the island since it had an extensive trade with other nations. Amawari Aji is known for its most famous ruler who ruled during the 15th century.

Nakagusuku castle was built in the 14th century by Aji Nakagusuku and enlarged by Gosamaru afterwards. Its walls are built up high following the contours of the land, and their outlines draw gentle curves which indicates his high architectural skills. Since it had little damage during the Battle of Okinawa it had been used as a park. Now it is inscribed as one of the World Heritage sites as well as 100 famous castles in Japan. 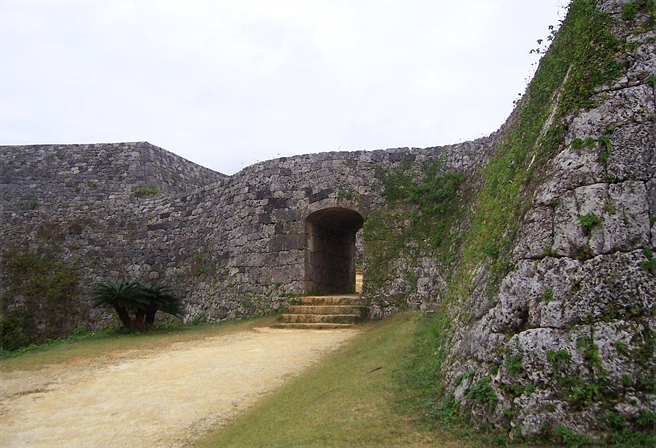 Zakimi castle was built in the early 15th century by Gosamaru, a local warrior and lord who helped unify Okinawa’s disparate nations into one Ryukyu kingdom. It is in ruins but the walls and foundations have been restored. The gusuku fortress has two inner courts, each with an arched gate which is Okinawa’s first stone arch gate featuring the unique keystone masonry of the Ryukyus. The spectacular views from its walls are: central island and north China sea including some islands. It was designated as a world Heritage Site in November 2000. 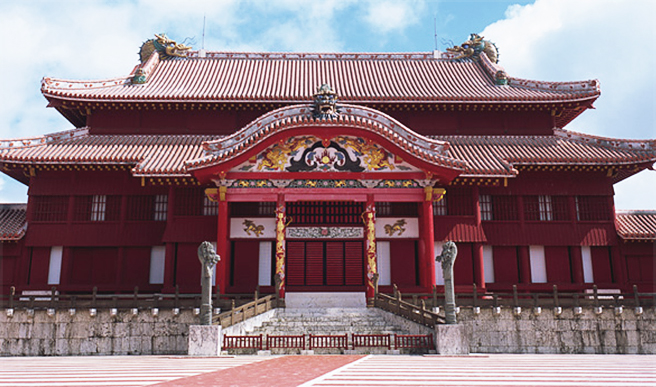 Shuri castle was built during the 14th century. When king Sho Hashi unified the three principalities of Okinawa and established the Ryukyu kingdom, he used the castle as a residence. Shuri florished as the capital of its political, economic, cultural as well as foreign trade. Shuri castle was designated a national treasure of Japan in 1928, then completely destroyed during the World War Two. The castle consists of three courts, the front court where king coronation ceremonies were held, the south court where was used for official lookouts from the Satsuma clan, Japanese officials and for Japanese ceremonies. Beggining in 1992, it was reconstructed on the original site based on photographs and historical records. 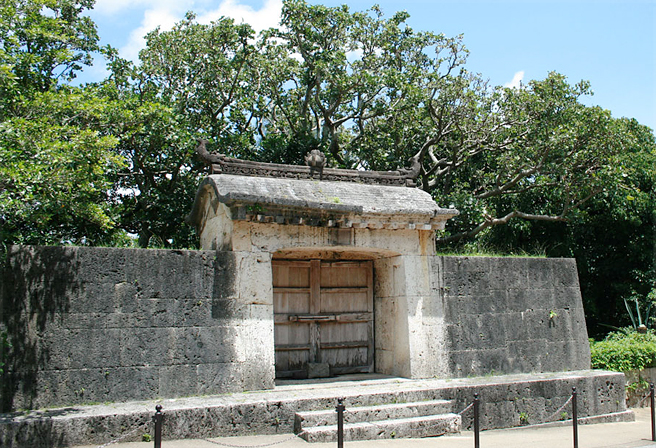 Sonohyan Utaki stone gate was first built in the early 16th century by master craft man Nishito from Taketomi island during the reign of king Sho Shin. There is a sacred area with trees behind the gate and whenever the king left the castle on a journey, he would first stop there to pray for safe travels. The stone gate reflects the kingdom’s advanced limestone masonry skills which also show many signs of Chinese influence along with a Japanese influenced gable in the karahafu style. It was severely damaged during the Battle of Okinawa, but was restored in 1957, and officially designated a UNESCO World Heritage Site in 2000. 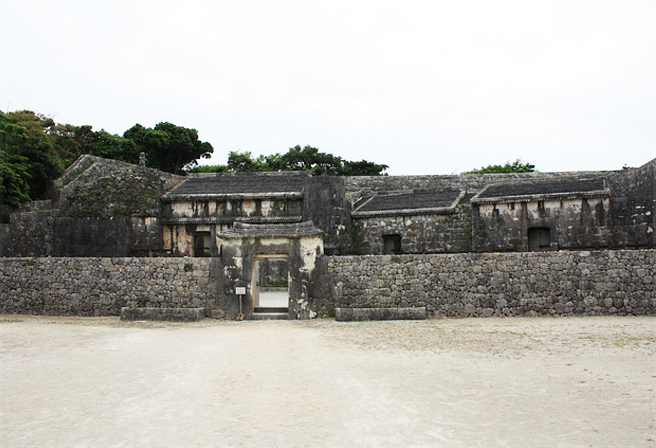 Tamaudun is a mausoleum built for royalty of Ryukyu kingdom by King Sho Shin in the early 16 century. The mausoleum’s name is originally written with different charactors which mean “palace of the spirits”. A stele in the outer courtyard, erected at the time of the mausoleum’s construction, states the provisions for being entombed at Tamaudun, and lists nine names, including that of Shô Shin. Some parts of east and west chambers were destroyed during the Battle of Okinawa but it was reconstructed in 1974. 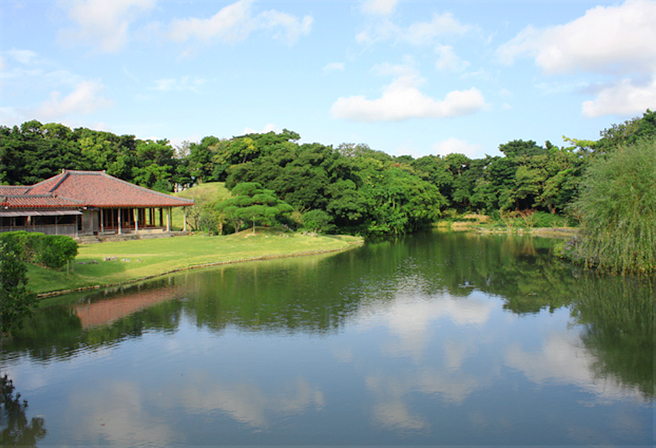 Shikina-en gardens were laid out in 1799 to embelish one of the residences of royal family and were used for the reception of an envoy from China the follwing year. The gardens feature a pond with two small islands which are a Chinese style hexagonal pavilion and other pavilions with red tiles and Chinese style arched bridges. The gardens were totally destroyed during the Battle of Okinawa. Restoration took around twenty years started in 1975. 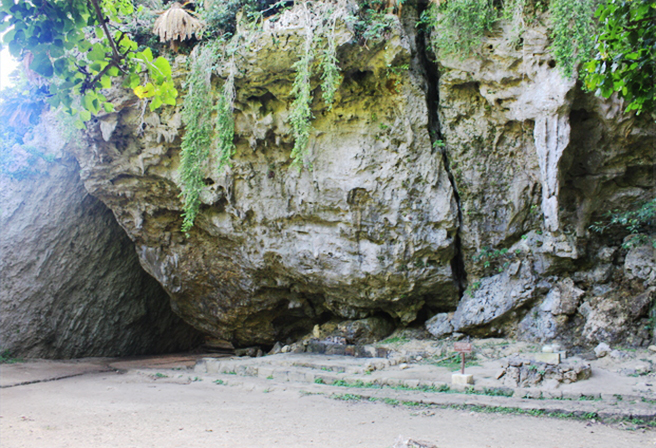 In local legend, Sefa Utaki was created by the goddess Amamikiyo and is an historical sacred spot that served as one of the key locations of worship in the religion of the Ryukyuan people for millennia. Rituals held at Sefa Utaki played a key role in the official religious functions of the Ryukyu Kingdom.
Its highest priestesses were inaugurated and elevated to the status of deities at the site during its most important ceremonies. Today, so many people visit this site as it is well known as one of power spots.