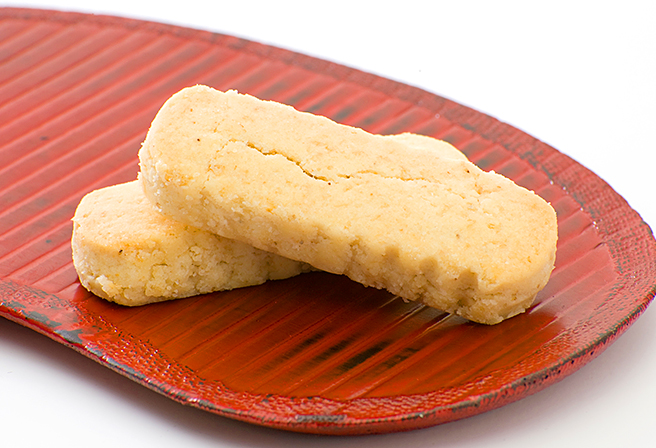 There are wide variety of sweets in Okinawa, but the “most popular sweets” is the Chinsuko.

The crunchy texture, slightly sweet, savory smell, and the plain taste is not just popular as a souvenir, but also loved by the Okinawan locals.

The “Chinsuko” is made from flour, sugar, and lard, and is best match with sanpin-cha (jasmine tea), uchin-cha (turmeric herbal tea), green tea, and black tea.
Here we understand why it’s loved by people all around the world.

The name “Chinsuko” is a bit strange (it sounds funny to many Japanese people also), but it means “rare baked sweets”, “golden baked sweets” in old Chinese.

Originally, a chef during the Ryukyu Dynasty Period made the sweets based on the thought of mixing Chinese and Japanese essence. The Chinsuko was eaten during celebrations as a royal court sweets.

Back then, the Chinsuko had a round shape like chrysanthemum, and it changed its shape to a narrow bar form about a century ago.

These days, many sweet manufacturers have made elaborate shapes and tastes.
Beni-imo (purple yam) flavor, pineapple flavor, chocolate flavor, find your favorite and enjoy the many different tastes.