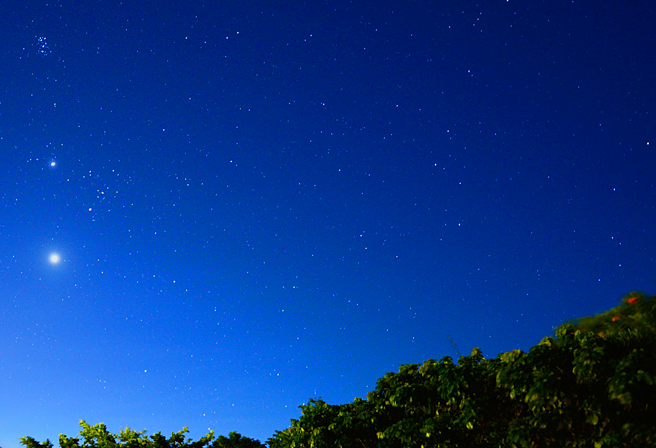 Okinawa’s rainy season ends a month early compared to mainland Japan, somewhere around the end of June.
It’s summer time after the rainy season ends.
Nice and sunny weather will continue until mid July, and it’s the best time of year to visit Okinawa.

The blue sky is said to be at its most beautiful during this season, but don’t forget that the starry sky is just as beautiful.
The Milky Way shines in the cloudless clear night sky and paints the sky with constellations such as “The Great Summer Triangle” and “Scorpio.”
If you’re lucky, you might be able to see the Southern Cross from the Yaeyama Islands.
If you ever visit, enjoy the beautiful starry sky that can’t be seen from the city area.

During this season, there’s an event called “Tanabata” (Star Festival) on July 7th.

In general, Tanabata is a star festival originating from China based on the deities Orihime and Hikoboshi (represented by the stars Vega and Altair respectively). July 7th is the only day in the entire year when Orihime and Hikoboshi can meet and spend time together.
Adults and children will write their wish on a strip of paper called “Tanzaku” and decorate bamboo with it.
(Many places will be decorated with Tanzaku during this season.)

Besides Tanabata on July 7th, Okinawa also has the tradition of celebrating another Tanabata for the lunar calendar, which is around early August.

Okinawa has a strong religious tradition of ancestor worship. On July 7th of the lunar calendar, Okinawan locals will go to their ancestors’ grave to clean, leaving sake (alcohol) and flowers. It is the time to welcome the ancestral spirits and prepare for the Obon Festival.