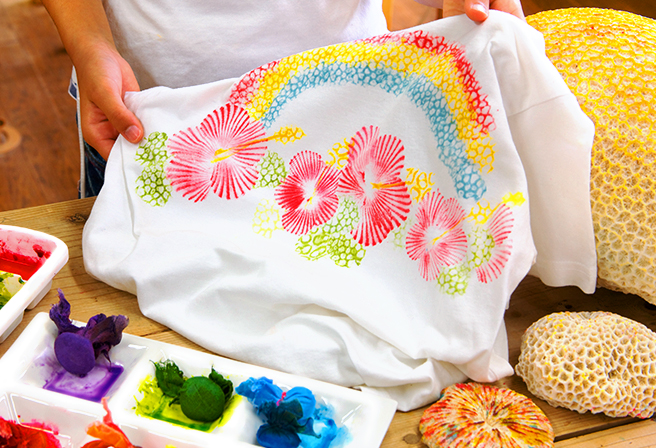 The Ryukyu Kingdom prospered from foreign trade, and with a mix of various cultures, it developed independent of main land Japan for a long time.
‘Ryukyu Somemono’, a traditional type of dyed goods, is one of those cultures that developed.
There are two types of traditional dyed goods which are created using Okinawa’s own original methods. These methods use either Ryukyuan indigo (※) or ‘Bingata’, a traditional Okinawan dying technique.

These beautiful indigo dyed goods have a natural feel that is inspired by the sea and sky of Okinawa.
On the other hand, bingata is a colorful technique that reflects the colors of Okinawa through delicate designs of flowers, birds and other images of the nature in Okinawa.
All of the handiwork crafted by the artists is done using paper patterns and glue to draw intricate designs.
Originally, this method was used to make kimono for the noble classes and wives of samurai, and even today there are numerous workshops near Shuri Castle.

These dyed goods are the emblem of the luxurious Ryukyu Dynasty.
However, recently the technique is being used to make not only traditional kimono and obi, but also many other items including t-shirts, cute accessories, and modern home accessories, making this the perfect souvenir from Okinawa.

Hands-on experiences at the workshops are also popular amongst those who want to make an original product using traditional dying techniques.
Although not made by a skilled craftsman, visitors can make a one-off original “Ryukyu Somemono”!

(※) Ryukyuan Indigo is made from a different type of plant from the indigo used on both mainland Japan and in India. The method used in the dying process is also different.