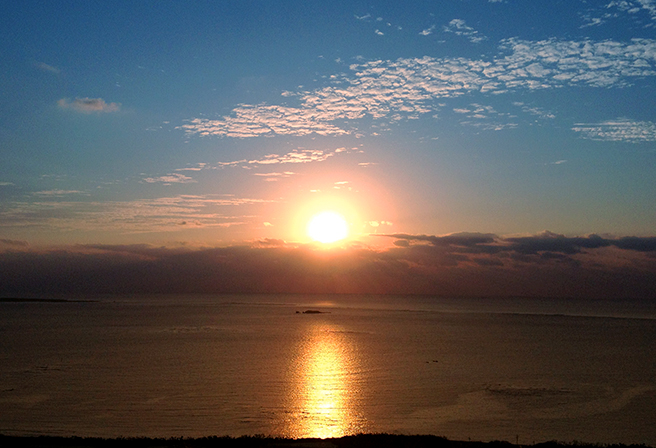 During New Year is probably one of the best times to visit Okinawa.

As Okinawa uses the lunar calendar, it is not unusual for Okinawan families to celebrate both the Lunar New Year （※） and the New Year. Matsukazari, a type of decorative pine cone, are sold at super markets and market places during this period, and you will also notice the bundles of paper being sold with incense.

This is known as ‘Uchikabi’, the currency used in the afterlife.
This is a unique custom of Okinawa that serves to look after their ancestors.

To celebrate the New Year, Okinawan people first make an offering to the Gods before enjyoing a meal with family members.
Unlike the mainland, there is no custom of eating ‘Ozoni’, a Japanese soup made with mochi, but instead tables are filled with numerous dishes that overflow with Okinawa spirit. This is known as ‘Osechi’.

Amongst various pork dishes such as ‘Rafute’ (pork ribs), mimigaa (pig’s ear), Kuubuirichi (stir-fried kelp and pork), there are also dishes such as ‘Tanmu Dengaku’ (mashed taro potato) which pray for prosperity.

One unmissable New Year’s event is the New Year’s Banquet at Shuri Castle Park, where rituals that were once performed on New Year’s Day during the era of the Ryukyu Dynasty are reproduced. Visitors can also enjoy dances on the magnificent and beautiful Ryukyu Dance Stage.