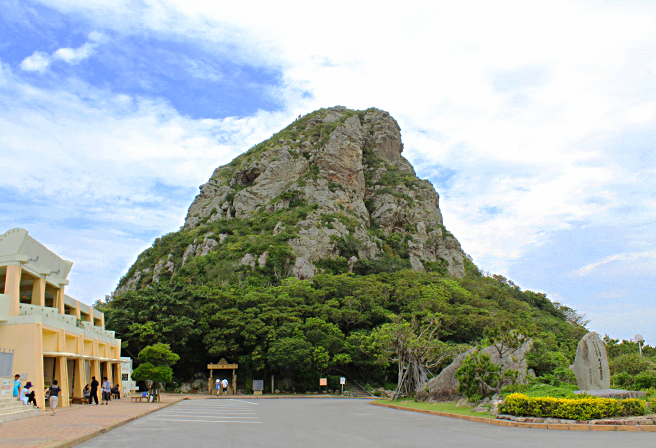 Iejima, also known as Ie Island, has a unique silhouette amongst the other remote islands nearby, and has been used as a navigation point for ships since long ago.

It can also be seen when looking out opposite the elevator inside the Churaumi Aquarium, or from either Kouri Island or Minna-jima Island.

To get to Iejima, it is 30-minutes by a local ferry from Motobu port, near Churaumi Aquarium.

Of course there are many activities to enjoy in the sea, such as swimming, diving and jet skiing, but if you visit Iejima then the one place you will definitely want to visit is Mount Gusuku, or more commonly known as Iejima Tatchu. Reaching 172m in altitude, this is the symbol of the island said to be its protector, and in Okinawan dialect, ‘tocchu’ means ‘one with a sharp point’.

Looking closely, it is a very rocky mountain (※), but if you walk up to the top (about 15 minutes), you can get a full 360-degree panoramic view.

The contrast between the expanse of sugarcane fields and a sea of emerald green is a wonderful view.

※Mount Gusuku is formed in way that is rare to the world. Known as ‘offscrape phenomenon’, old bedrock dives down into new bedrock while pieces peel off.

About 30 minutes by ferry from Motobu port.