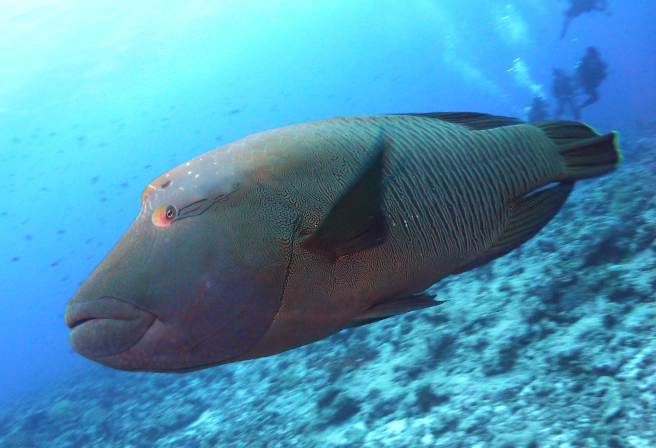 The Napoleon Fish, also known as the Humphead Wrasse, is famous for its charmingly large face and friendly personality which make it a celebrity amongst diving communities.

Not only can it be found in the diving spots surrounding the Kerama Islands and Ishigaki Island, but there is also a chance of encountering this fish around the main island of Okinawa, too, as well as at the Churaumi Aquarium.

Growing over 2 meters long, its scales are as big as the palm of an adult making this the largest of the Labridae family in the world, and in Japanese, it is also known as ‘Megane mochino uo’, or the ‘spectacled fish’. This is due to the pattern around its eyes which make it appear to be wearing glasses.

The most interesting thing is that all Napoleon Fish are actually born female, only changing to males after they have reached full maturity as a female.

Once they have evolved into males, their whole bodies slowly turn a blue color and the lump on their heads grows bigger to resemble the cap Napoleon was famous for wearing, hence the name ‘Napoleon Fish’.

Its meat has a refined taste and it has been highly valued in Cantonese cooking as the highest graded fish of all. Unfortunately, this fish has become an endangered species due to the ease with which it can be captured.

This fish has a long life, living for 30 years or more.
Whether you meet them in the ocean or an aquarium, why not see if you can guess which are the males and females.