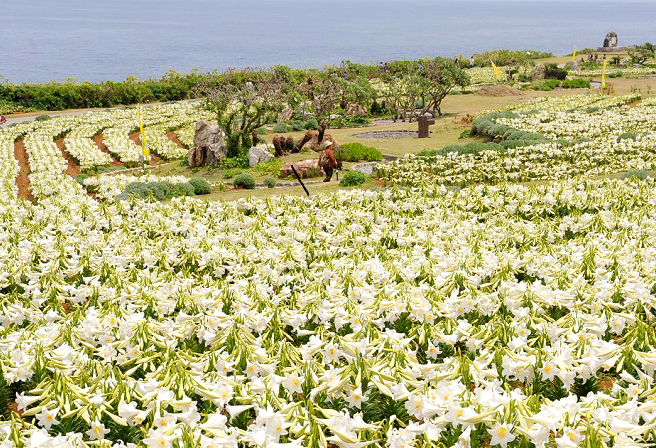 To enjoy Okinawa to its fullest, exploring the isolated islands both big and small that make up the prefecture is a must. Ie Island is definitely one to visit in early spring, from the end of April through to May, and can be accessed by a 30-minute ferry ride from Motobu Port, close to Chuhara Aquarium in the northern part of the main island.

This remote island is also famous for having a mountain shaped like a hat, known as Shiroyama (Tatchu).

Ie Island is a quiet place with a population of less than 5,000 people, yet every year in Golden Week it draws in crowds of visitors from both around Okinawa and further afield. During these 2 weeks, the Ie Island Lily Festival takes place and roughly 40,000 people are expected to visit from the main island. Extra ferries will be running, with tickets available to book in advance.

The Lily Festival on Ie Island is Japan’s earliest, and here visitors can find not only pure white Easter lilies, but also 90 other varieties of plants with 1 million flowers blooming in different colours. During the festival, a sweet scent sweeps over the whole island.

The panorama of the sea and the sky spreading out behind the vast lily field can also be seen from the small observation deck, and various stalls are set up during the festival. There are also plenty of other events such as traditional dancing which will take place on Saturdays, Sundays and national holidays.

The festival is easily accessible thanks to the buses which run directly from Naha Airport and Naha city to Motobu Port. It is also possible to rent a bicycle from the harbor and cycle to the festival venue’s Lily Field Park.