The Okinawa Rail, a Bird Unique to Northern Okinawa 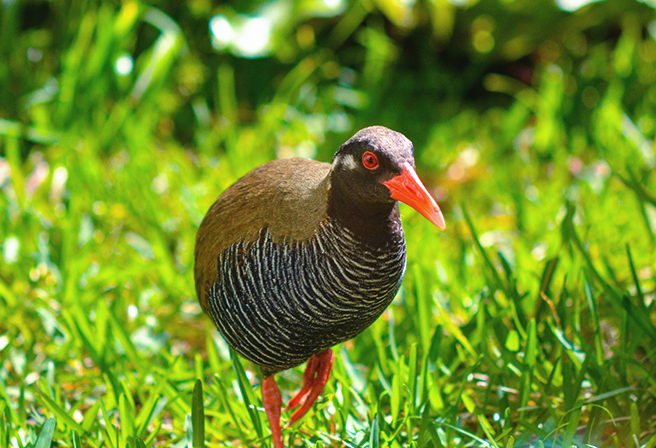 With many rare and endemic species, Okinawa is a treasure trove of wild birds and a sanctuary for bird watchers. The Okinawa rail, or “Yanbaru Kuina” in Japanese, is the rarest of all and was registered as a Natural Monument of Japan.

Throughout the world, this wild bird only lives in the Yanbaru area of northern Okinawa and is unlikely to show itself to humans due to its cautious personality. It is because of this that it was only in 1981 that it was officially certified as a new species.

Its biggest feature is that, unlike other birds, it cannot fly and so it has to jump up into the trees to sleep.

The population of the Okinawa rail is currently about 1500, and the area it is found in gets smaller each year.

It is hard to find in the wild and so those who would like to see the bird up close should stop by Kuina Forest, the Okinawa Rail Habitat Display Learning Facility in Kunigami village.

Here the bird’s habitat has been reproduced and there is an observation booth which allows it to be observed through glass.

The birds inside this observation booth can be seen bathing and they are also very curious about the visitors who have come to see them. They are also funny to watch when looking for food on the ground.

When driving in the northern part of the main island, there are often road signs with a picture of the Okinawa rail.
Please drive carefully if you come across a warning sign for them jumping out!