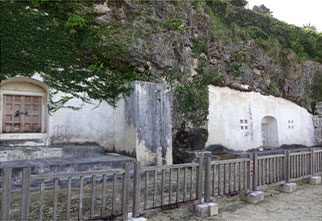 Glimpse the history of Ryukyu Kingdom.The mausoleum which houses the remains of the Ryukyu royalties nestles in a cave on a cliff. It was formed during the 13th century, before the island was divided into three kingdoms. You will get to see and learn how the Buddhism effected the locals back then by observing the bronze statue and sculpture inside the tomb that are recognized as Okinawa's cultural properties.