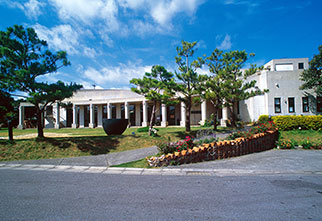 Sakima Art Museum was opened to convey a message of world peace featuring the permanent exhibition of arts by Iri and Toshi maruki.
Present Marine Corps Air Station Futenma can be seen from its top.The rooftop of the museum built on the former US military base is accessible to the public. On June 23rd, Okinawa’s memorial day for the battle of Okinawa, the sun sets on a horizon which is placed to the hole on the roof.